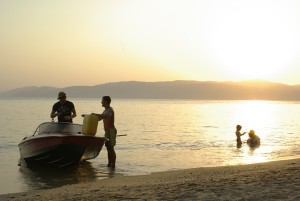 Cameras are machines, and although they do feature a certain amount of artificial intelligence, ultimately they can only do as they are told. Knowing how your camera is likely to react in any given situation is the key to understanding when it is destined to get things wrong and that it is time for you to take control.
In a situation like this, where we are shooting into the light, and the sun is reflecting off the sea, the camera’s metering system will assume it is looking at a very bright subject – which it is. The camera will try to render the sea and sky so that we can see the detail – so it will aim to create a mid-tone of them. Only you know that it isn’t the sea and sky that you want to see the detail of, but it’s the people and the boat that are the subjects.

Finding a mid tone
To produce a final picture that looks the way we want it to we have to take control of the exposure and so over-ride the metering system. Instead of letting the camera measure the light reflecting off the sea, which is what it would do if left to its own devices, we have to direct it to an area we think is important. To get the right exposure for this scene I took a reading from the sand on the beach by my feet and then locked this reading into the camera, using the exposure lock button. I used the sand to take a reading from as it offered a good compromise between getting an exposure that would show the details of the faces and keeping the idea of silhouettes against the sky.

If you are going to take lots of pictures using the same exposure it can be simpler to transfer the exposure settings into manual exposure mode so there is no danger of the lock coming ‘unlocked’.
This reading has preserved enough detail in the boat and the people to show what they are doing and the expressions on their faces, while still holding on to that backlit sunset atmosphere. 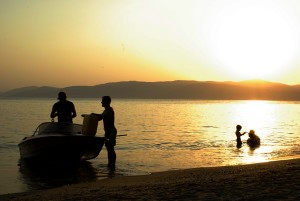 Had I left the exposure up to the camera the picture would have turned out something like this. Although still an effective image, I prefer the version that shows more detail in the subjects.

Join me on a street photography masterclass in London to improve the way you see and shoot. Details here, on my One-Day Street Photography Masterclasses page 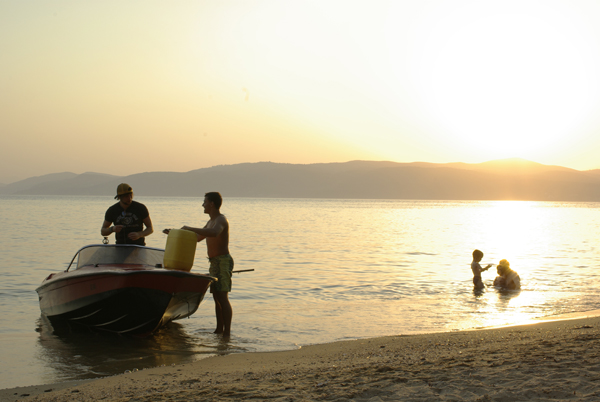