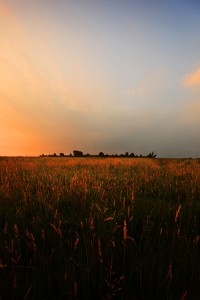 Balancing the brightness of sky and land is a regular problem at any time of day, but first thing in the morning, when the weak sun has still to cast its rays across the landscape, showing the detail in the foreground requires drastic action. On this morning I wanted to capture the atmosphere before the sun had really got up and started to shine. With a fine cover of cloud in the east the sun was up but only as a giant red ball with no real power, but its influence was enough to add a golden glow to the heads of grass in this late summer field.

I had been pointing the camera skyward to place the stone circle at the bottom of a frame of ‘big sky’. From the many times I have visited this place I knew there is only one angle from which to shoot this stone circle that allows it to be shown as a ring rather than a fragmented collection of rocks. It’s unfortunate that the only shooting position is in a dip in the land, which means it’s impossible not to be looking up at the subject. But with a wideangle lens aimed upwards to place the stones at the bottom of the frame the picture just looked like many others I had shot before. I was shooting ‘big sky’ because that is what I had in my head before I arrived, but I had to look a little harder at the scene when I realised the ‘big sky’ composition wasn’t going to work.

Looking afresh made me realise that I was missing an important and interesting element of the scene – the grass heads. The naturally low angle also meant I could include the grasses without tilting the camera down – so distortion would be kept at bay as the camera would be absolutely level.
While including the foreground solved one problem it introduced another. In the unlit morning, the grasses were much darker than the sky, and even the stones in their elevated position. The answer in this situation is to use a neutral density graduated filter to reduce the intensity of the light from the sky while allowing the light through from the lower parts of the scene. I used a 0.6 ND grad, and picked one with a ‘hard’ transition from clear to dark as the horizon is pretty straight in this shot.

It’s important in scenes like this, where you want to capture the natural colours of the morning light and sky that you set an appropriate white balance on your camera. I always use the normal ‘daylight’ setting, as this produces colours closest to what our eyes see, and will show those pinks, peaches and reds in all their glory. If you use auto white balance (AWB) the camera will do it’s best to neutralise those colours.

Find Beltany Stone circle on the map, and read information about it 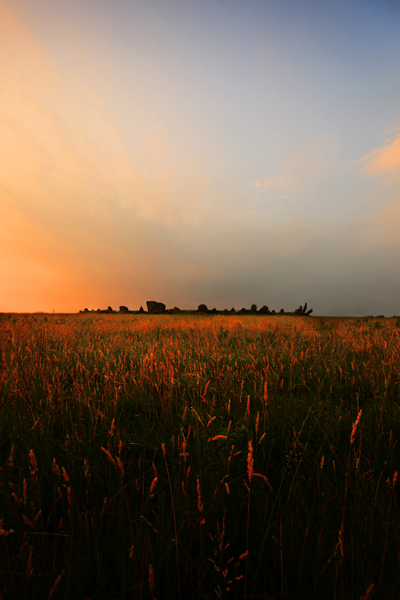