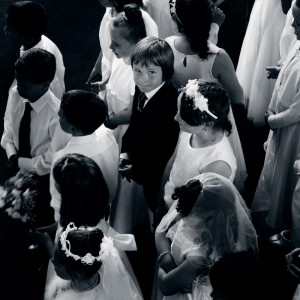 I had been asked to take pictures at a First Holy Communion by the father of the boy in this picture. I’d done all the usual shots and had more than enough pictures to keep daddy happy. With the job safely covered I was able to hunt out some different angles, and to take a few risks that may or may not have paid off.
I’d reckoned the organ loft would produce a few good pictures anyway, as I could get the children posing for the congregation at the end of the service, and get that wider view to include the families and guests crowding round to give a fuller account of the story. I used a focal length to just include the kids at first, as I wanted to catch some of their excitement and their interactions with each other. For many of them this was the first special occasion in which they had been the centre point, so they were buzzing.
As I framed the group the boy in the middle, who was my subject, looked up and saw me above him. As his eyes met the lens I checked the focus was right on him and I took the shot. All I got was the one frame, as he quickly reverted to facing forward at the crowd of other picture takers.
I hadn’t known that he would look up, and if he hadn’t I’d have just got some nice pictures of the whole environment, but because I was there and ready, when he did look up I got a picture that I couldn’t have prayed for.
His eye contact demonstrates how we react to other humans. The eyes make us look at him first, and we find it hard to look away for a while. We do, and we investigate all the other things that are going on in the frame, but the first and the last things any viewer will see are those eyes. They are only small in the picture, but their power is undeniable.
As usual I shot this in colour, and converted the file to black and white using the Channel Mixer. The more detailed channel is always green, and its more moderate contrast suits this subject very well. I tempered the bias to green with a touch of red and some noisy blue, but the green channel accounted for 80% of the information.