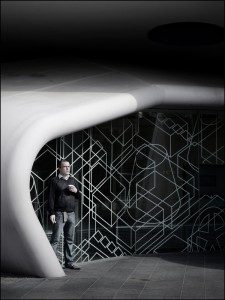 This is one of those everyday scenes – man steps out for a cigarette and loses himself in thought. (Or stares blankly ahead with his mind completely switched off, perhaps.) It’s a situation that’s played out thousands of times a day in towns and cities all over the world, but this one made me stop to take a picture for two simple reasons – the curve of the part of the building the man is standing under, and the sun streaking up the street and showing off that curve so well.

I was lucky here. I didn’t have to wait for someone to come and occupy the right place in the scene, as he was already standing there waiting for the right person to see the potential. I love that curve and the way the side-on light defines its roundness and the texture of the material it is made from. What works so well is that it is set against the shaded area, and thus it stands out and makes its statement nice and clearly.

The main issue I was faced with here was that of exposure. The hard contrast between the lightest areas and the deep shadow at the top of the frame meant I had to concentrate for a second to read what was going on. The most important area is nearly always going to be the person’s face, but here we have the consideration of the almost-white concrete of the curve too. I didn’t want that to burn out, but I also wanted to show that it is nearly white. The camera would look at all that shadow and open itself up to allow more light in, but I guessed that the power of those highlights might just balance things out. I would normally have exposure compensation set to -0.3EV, but on this occasion I reckoned the multi-pattern metering would sort things out on its own.

I wanted a shallow depth of field and so opened the lens to f/2 – as wide as it would go, and the shutter set itself to 1/4000sec.

The man is set in to the left-hand third of the frame and I allowed the curve to sweep close to that left edge and then come gliding back in again. Shifting my position I slotted the smoker inside the curve, in a way to contain him, and then filled the rest of the shot with the funky white-on-black graphics on the glass.

The upright format suited the breadth of the action, and allows the pavement at the base and the deep infinite shadow at the top to demonstrate depth. And that emphasised depth forces the curve and the man to pounce out of the picture in to viewers’ eyes.

Exposure has to be a conscious decision and, especially when working in sunny conditions like this, can’t be left to the camera to work out for you. You have to read the scene and determine what the camera will see and what it will do. Then you choose to over ride it, or let it get on with it. The most important thing though, is that you thought it through and made that choice yourself. Then the picture can be yours, and not belong to the camera.

Come on a street photography course with me in London. Follow the link for more information.