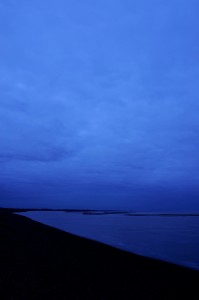 The sun had well and truly gone at this stage, and its setting had not brought the spectacle I had been hoping for. Nice enough, the colours hadn’t played across the sky as there were simply too many clouds. I was determined though to go home with something in the bag, so I sat down to take a rest and to have a think. I had brought a folding chair with me to do this, as I was beginning a faze of purposeful looking and contemplation. I figured that rather than rushing between locations and snapping what occurred to me first, I should try to slow down a little and spend more time looking. The chair thing would help me do this, as by sitting I would be more likely to stay in one place for longer. This wasn’t a trekking sort of day, as I knew I wasn’t going anywhere other than on this stretch of beach. I could carry the chair, dump it down and work around that as a base.

I had been to this location so many times before, and although I had taken plenty of nice, and even good, pictures there, I never felt that I had quite captured whatever it was that appealed to me about it. In actual fact, the issue was that I hadn’t actually identified what it was that appealed to me – which kinda makes it difficult then to capture it in a photograph. The idea of the chair was that I would sit for a while looking at the scene to try to unravel the mystery. If I sat I wouldn’t be bothered by the weight of my camera bag, or the urge to move on you get sometimes when you stand, so I could sit in comfort until the answer came to me.

I’m not sure that I really did find the answer to the question I had in my head, but I did find an answer to a question I hadn’t thought of. As the sun went even further below the horizon and the land areas became silhouettes against the sky and its reflection in the sea I realised part of the attraction of the place is the curved line of the shore around the bay. In the simplified form of the monochromatic moment I saw the light. Where I live we don’t see much sky, as there are houses and trees all around, but here the sky is massive, stretching right down to the ground – so the big sky is one factor. And the shape of the coast line is the other.

Waiting until the sun had gone the sun turned a cool blue that showed up perfectly in the daylight white balance of my camera. My eyes were seeing grey, as my brain filtered out the evening shades, but the camera was able to help me see the reality.

I tried plenty of compositions, but what worked best was when I just concentrated on the principle elements of the curve and the sky. With the camera angled upwards slightly I got rid of the foreground shingle and plants that were fighting for attention in the dim lighting. Removing those details simplifies the scene and makes it clear what I am trying to draw the viewer’s eye to. And exposing for the sky has brought out its detail, and kept the land mass to a basic silhouette.

I don’t think I have really captured the essence of this place yet, as this shot is a bit of a side track. I’m actually quite pleased as it means I can still go back and carry on trying – it’s a wonderful place. 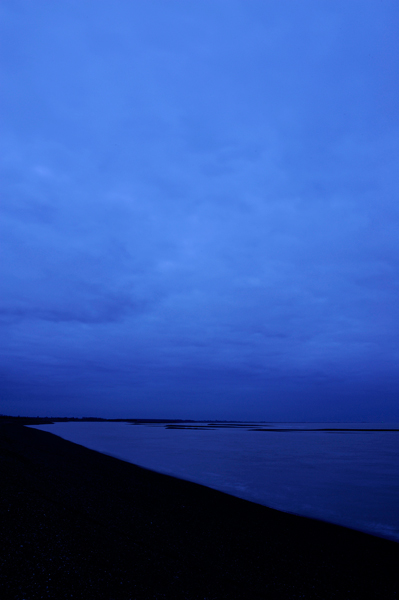