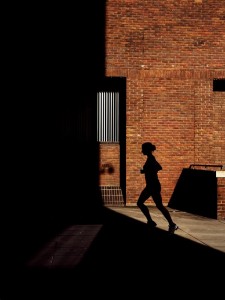 Silhouette of a running girl  – Exposure, coincidence and making your own luck

A silhouette can be a powerful graphic element in a photograph, but to work well it needs the right background so it can stand out and the right exposure to make it just dark enough. When we create silhouettes we reduce the scene we are photographing to just a collection of shapes, lines and edges, so we also need to be careful that they all interact well with each other and that they don’t overlap when they shouldn’t.

This is a picture I took one sunny morning on the pathway that leads to the north side of the Millennium Bridge in London. The sun was streaming between two buildings and creating a river of very bright light in the generally shady alleyway. What struck me at the time was the immense contrast between the area that was lit and that which wasn’t. As people walked to the bridge I could see that they were crossing from the two extremes – one minute light up by the sun and the next in the shadow of the building. By positioning myself at an angle to the path of the light I could get a view of the people in the shade while they were still passing part of the background that was still alight.

Thinking about the shot I wanted I determined that I should expose for the light levels on the sunlit part of the wall, as this would render the shaded part of the scene very dark. Exposing for the shaded area would obviously render the lit wall very over exposed and much too bright. If I let the camera do its own thing it would have made shade just a little bit dark and the light area a bit too bright. You have to take control in this kind of situation, know what the camera is going to do, and then set your exposure yourself. For this shot I set the exposure about 2EV darker than the camera would have done – because I wanted the shade to be black and the wall to bit a fraction too dark so the colour of the brickwork would become saturated and powerful.

I had to wait for people to cross from the light into the shade to take the shot. The area in which they could be to make this work was actually pretty small – probably about six foot – and they needed to be a particular distance from that background wall to be framed nicely. What complicated things more is that to get a completely clean outline they would also need to have cleared the triangular shadow created by the smaller wall on the right of the frame. As you can guess, I had to wait some time to get a person in exactly the right spot – even though it is a very busy area.

I also needed the right person. Someone with a distinctive outline that would give visual clues to what they were carrying, where they were going or what sort of person they were. I shot a few business people – singles worked and pair became confused very easily – and everything depended on the pose they were in when they hit that exact spot where the picture would work.

I saw this girl running quickly towards the magic paving slab, and with fingers crossed pressed the shutter when she got there. And I was delighted when the preview arrived on the screen. Her pose couldn’t have been better had I posed her myself, and her feet landed perfectly to be in the shadow but without being lost in the darkness. She had just cleared the triangular shadow and there is a comfortable space in front of her for her to travel into before she hits the wall of darkness.

The picture works because of all the coincidences that came together to make the shot. The position of the girl and her pose, and well as the position of the sun and the type of the light – I shot again the next day in overcast conditions to show how reliant the success was on the exact weather at the time.

That everything came together was a stroke of luck, but it was luck I waited for and luck I helped to make for myself. I spotted the potential and waited for the right person to be in the right position. That person may not have come along at all, but I did what I could and hoped for the best – and it happened. A fisherman will put himself in the best spot on a good river and use the right bait, but only luck will bring the fish, and it’s the same with this kind of shot. This fish just happened to have its hair up and trainers on!

You could shoot pictures like this too. Find out how on one of my photography workshops. 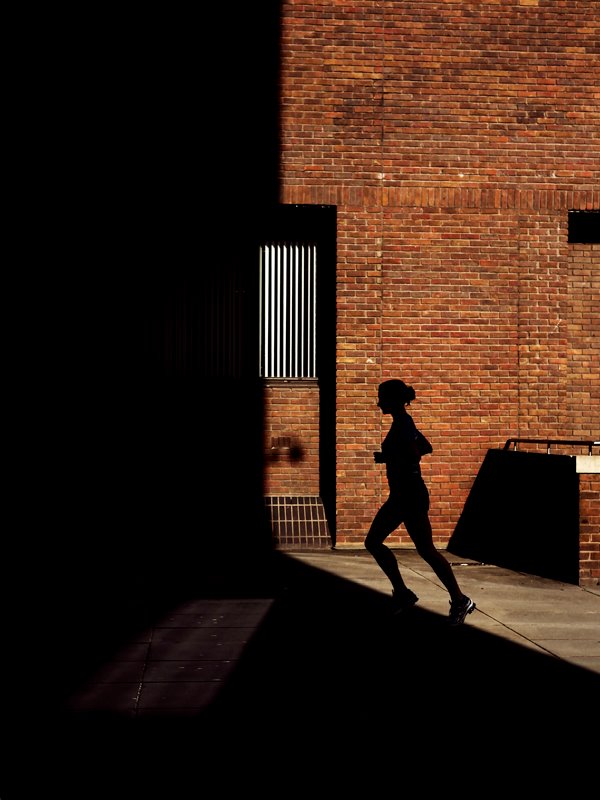