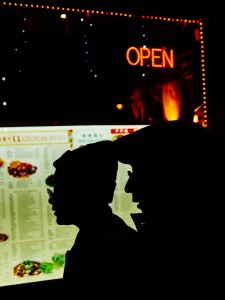 While shooting in the city during daylight is exciting, the style of image that can be created is very often in the hands of the weather. Light during the day, outside at least, is dependent on whether there are clouds or not, and the time of day. Strange as it may seem at first, light is much more constant and reliable at night. At night light is all man-made and lamps that are lit at 9pm on a Tuesday will usually be burning at 9pm on a Thursday.

What I particularly enjoy about shooting at night is the different colours created by the various light sources we find in the street – orange or green street lights, the yellow glow of a shop window, and the multitude of hues produced by neon signs. We also have light coming from all angles too – above from street lights, on a level from shop windows and from below from car headlights – which inevitably produces images that catch the eye.

For this picture I wanted to make the most of the illuminated menu in the restaurant window, by using it as a bright flat background against which I could create silhouettes of passers-by. I liked the little orange lights around the window and determined to use them as a neat frame-in-a-frame and to fill that sector of the image with interest when the subjects were low down in the frame.

I wanted people in the shot to appear completely black – in the darkness of the evening that was easy. I exposed for the light of the menu, and then arranged my composition on the back of the camera.

Obviously, anyone who walked between the camera and the menu would appear in silhouette, but to make the shot work I needed someone with an interesting shape. I didn’t know who would appear, but I did know that I wanted a good profile and accentuated features.

It was luck that brought me these two well defined heads with their glasses standing away from their face adding extra interest, and luck that made them coincide to form that jagged patch of light between them as they passed me by. It reminds me of Edger Rubin’s Vase, where we see a face or an egg timer between the shapes – though we are drawn to look, no such apparition is there to be puzzled out.

I like the sharpness of the shapes and the clarity around the features of the faces – the lips, the noses and the peaks of the hats. The shapes and lines have a happy parallel harmony that looks arranged and organised, but which is just an accident of timing and position.

To get this kind of picture you do need to know what you want and what is achievable. You have to plan a bit, imagine the finished product and get yourself in the right position for it all to come together. And you have to keep your eyes open to the possibilities of what may happen, so you are ready to capture them when they occur.