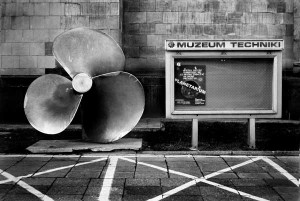 This ship’s propeller really caught my eye as I walked around in Warsaw, Poland, as its curved form is surrounded by a mass of squares and triangles.

Much of Warsaw’s non-modern architecture is based on right angles and straight edged shapes with few curves or circles. Although I suppose I hadn’t really made a mental note of that fact, when I came across this object, that has no straight edges at all, I was quite struck with it. In taking the picture I wanted to get over the contrast between the roundness of the propeller and the sharp edges of the notice board next to it, plus the visually powerful squares of the walls behind it. It was only when I looked through the camera that I noticed the blocks of the car park and the lines painted on the floor. These were something of a visual bonus.

At the time I had a wideangle lens on the camera and this is what I made the first pictures on. Viewing them on screen I realized that I wasn’t getting across the strength of the squares, as being close enough to fill the frame was creating too dramatic a perspective, which in turn distracted from what I really wanted to show. Instead I fitted a more standard lens (in this case a 28mm on the APS-C camera). This meant I had to move further away, which helped me to include more of the ground and those lines, plus it flattened the perspective. Moving away also meant I would have to worry less about the lens distorting the brickwork into curves rather than those strong straight lines.

Keeping the camera absolutely level was essential for the graphic and purposeful image I wanted to create, and keeping a wide aperture would allow the propeller and the notice board to stand out from the background, while still retaining enough focus in the brickwork that the shapes could easily be seen. I didn’t have a tripod with me at the time, but I wished that I had. Although the shutter speed was short enough to hand-hold the camera without fear of camera shake, mounting on a tripod makes getting everything right-up and level so much easier. In the end I took about six pictures before I was satisfied that I’d got what I needed.

Fortunately the day was overcast, so the reduced contrast of the softer light allowed me to show the three dimensional shape of the propeller without burnt highlights or overly dark shadows. The soft contrast also helped to display all the fine detail in the stonework, the notice board and the car park.
Originally shot in colour, I converted the picture to black and white via a channels conversion, using a combination of green and red channels. The green channel gave me fine detail, while the influence of the red channel boosted the contrast of the scene a little.

I didn’t have to do too much else to the image, other than some minor curves adjustments and then some unsharp mask to finish. The exposure was already quite dark, which I think adds to the atmosphere. The place the picture was taken is quite hash and serious, so making a jolly picture would not have been appropriate. 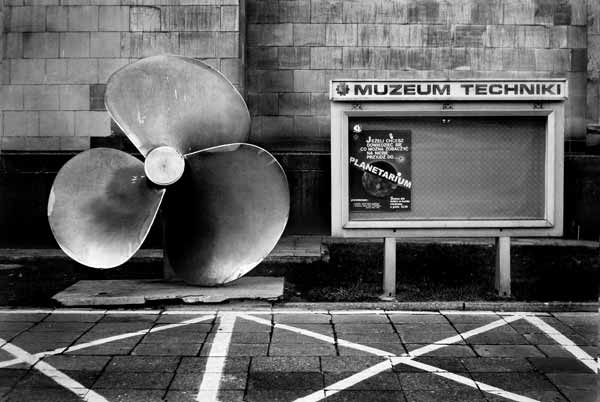