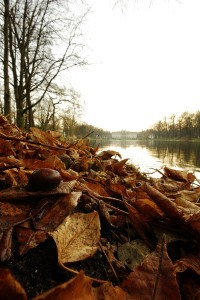 There are plenty of places all over the world that have been photographed again and again in exactly the same way from exactly the same place. Often there is a really obvious angle that lines up essential elements of the place so well that it takes will power not to take a picture from that position – even though you know that everyone else who has ever visited that site has the exactly the same shot. In fact, at some sites the famous view is so famous the place is unrecognisable from any other angle.

If you are making a photographic documentary of a place it is probably important to capture the well-worn view, but at the same time we should be looking to start afresh and to capture a different take. I have found that in many cases the most popular views aim for the spectacular image rather than that which communicates what the place is really like.

In shooting the Palace on the Water, in Warsaw’s Lazienki Palace gardens in late autumn, I wanted to get away from the obvious views across the lake with its symmetrical reflections and well formed tripod holes, to assess the place anew so I could show what it all meant to me.

One of the most striking things about the surroundings of the palace, apart from the lake, is the mass of trees. While the popular view shows trees it doesn’t really demonstrate quite how many there are or their importance to the overall atmosphere of the place.

In this picture I used a really low angle to show what is on the ground, the types and volume of trees in the gardens as well, of course, as the lake and the all important distinctive characteristics of the palace itself.

In the autumn the place has a quite distinctive feel, with the golden foliage, wet and colour saturated, lying on the ground, and the lightly overcast low angled sunlight. The air is cool and the atmosphere damp, rich and earthy. I wanted to show the detail of the foliage, its colours as well as the palace itself – so this low angle seemed the ideal route to take. I used a 10mm wideangle lens (the equivalent of 15mm on a full frame or 35mm camera) and closed the aperture down to just f/8 to get a significant depth of field without attempting to achieve complete front to back sharpness. By keeping enough detail on the palace it’s easy to see what it is, but with the focus and attention on the foreground the view is presented in a different way – most people focus on the palace.

The soft light meant a low contrast effect in the leaves and the horse chestnut came naturally, and also meant I didn’t have to contend with extreme brightness differences between the foreground and the background. I took a spot meter reading from the palace and then opened the exposure by 1EV to render it a lighter grey tone – which just happened to be perfect for the foreground details as well.

To get the low angle I held the camera down on the toe of my boot and guessed the framing – checking straightness and composition on the LCD each time. If I had been using a film camera I would have laid on the floor, or used an angle finder to make sure I got everything right first time. 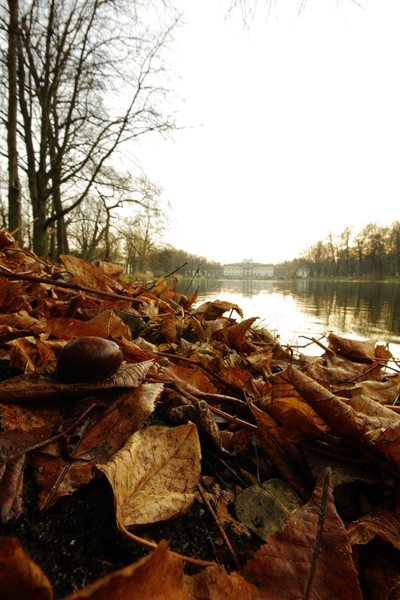