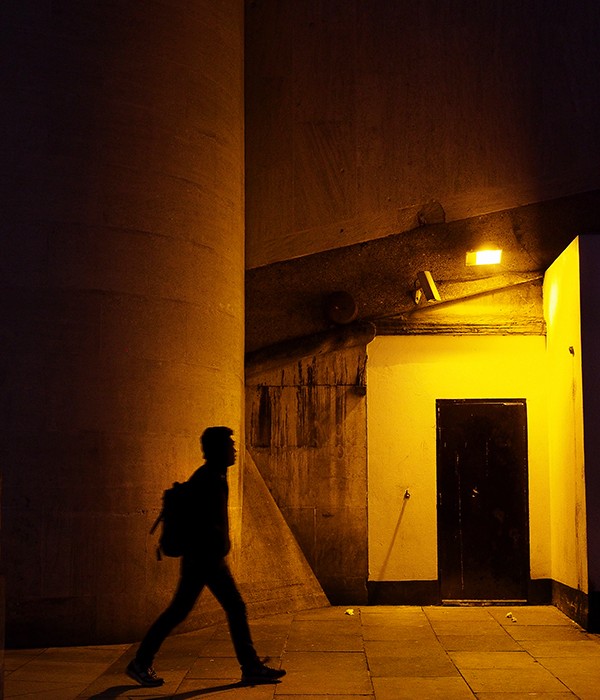 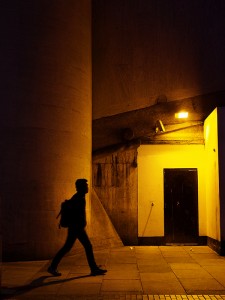 It is through directional lighting that we appreciate the three-dimensional qualities of the things around us. Very early on in primary school art classes we learn to draw a cube and shade one side black and another grey; I was amazed how it jumped off the page, and repeated the exercise over and over. Of course we understand how all this works when we have a pencil in our hands, but it is another thing to apply the same principles when out with a camera.

This image has a sense of depth through the different layers created by the lighting of the scene, and these make the man stand out clearly from the foreground and the background. As a silhouette he could be a cardboard cut-out, except that the light falling on his left foot suddenly lets us know he is in fact a 3D object.

The single bulb that lights the scene creates a definite mix of 2D and the 3D objects, and the contrast between them makes one stand out from the other. The heavy side lighting on the pillar describes very clearly its cylindrical form, and because of the strength of this impression the flat cut-out top half of the man’s body stands out. That he is sharply defined, with jet-black hair, eyebrows, lips and nose, against one of the lightest areas of the scene, our attention is drawn immediately. The figure jumps off the page by being 2D against a 3D background, and then by his 3D foot against the 2D background of the pavement.

We know exactly how far into the scene the man is, as we have his shadow to mark the position for us with engineer’s precision on the pavement – the grid of which lends us the front-to-back measures of the stage he is striding across.

There is further mix of 2D and 3D elements on the rear wall, where the long straight shadow of the door catch breaks the flat plane of the image background with one small but significant area of relief.

I rather like that the fact we only have an outline of the figure makes his identity something of mystery. We get some clues, but not enough to really know much about him. He evades our detection, just as he bypasses the CCTV camera mounted on the wall in the background – that focuses only on a very empty dark door where there is clearly nothing going on. The mystery is continued by the dangerous deep orange night-time glow of the ambient street lighting.

The right person in the right place

When I saw this scene I knew I would be able to get something out of it, so I lined up the shot and waited for the right person to walk in to it. What makes this chap work is that he is in full hurried stride, giving a clear sense of his outline shape. This stride coincides with the moment right before his outline breaks the brightest edge of the pillar, so his darkness is at maximum contrast and he doesn’t interfere with that powerful long straight line. That he doesn’t intersect that line is critically important – we rely on the strength of his outline to identify what he is, and if that outline is complicated by external elements the message becomes less clear. And rather nicely, his shadow leads us from the lower left corner in a powerful diagonal straight to the subject of the photograph. 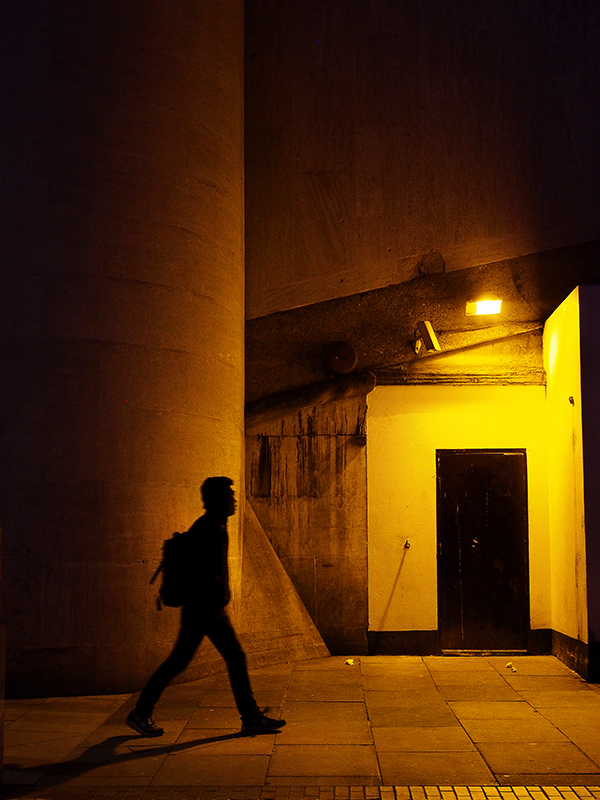