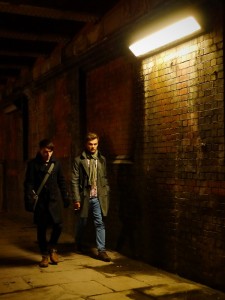 Daylight is the ultimate light source and its almost infinite combinations of characteristics and properties make it an endlessly variable, changeable and exciting type of illumination. And consequently it is by far the more popular form of lighting for most photographers. Your camera is set up to deal with daylight by default and all your systems expect it unless you intervene with a different manual instruction.
Photographers are so used to using daylight that when the daylight fades cameras are put to bed to await sunrise the next day, or portable sunlight is loaded with batteries and slipped into the hotshoe – a flash gun.
When you put your camera away after sunset you miss the opportunity to enjoy the multitude of different coloured lights humans use to brighten their world during the night, and to capture the atmospheres those coloured lights can create.

I shot the picture shown here early on a January morning under Southwark Bridge in London. The sky was just coming alive, but under the bridge the world was lit only with artificial lighting – in this case fluorescent strip lights. We tend to avoid fluorescent lighting because it can be ugly and it often creates a sickly green cast, but it is important to appreciate that fluorescents come in many different colours, from white to yellow to red, as well as green. The light here was old and dirty, and its bulb emitted a deep yellow glow that felt strangely warm at that freezing blue hour.
What I wanted to capture at this scene was the haven of warmth that the light was creating in contrast with the dank, wet brickwork and the wrapped up people using the tunnel at that time.
The obvious shot from the direction I approached the scene was from the other side of the road – shooting square to the wall, with a people walking into the patch of light. 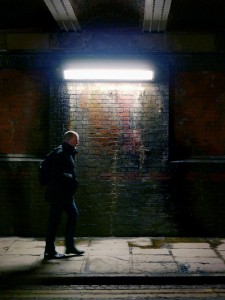 I know most people would have used auto white balance, or even switched to fluorescent, without recognising that the colour of the light is an essential element in the atmosphere. I had the camera on the daylight setting, as I do for 90% of my pictures. The first image shown here was processed from raw with the fluorescent setting selected so you can see the colours that most people would come away with.
In this shot wanted to make the most of the symmetry of the structure, and with the light striking the subject at such an acute angle we only get an outline of the front of the body. It’s not a bad angle, and I quite like that lit rim of head, face and trousers, but to engage an audience I think we need a bit more than just that.

A different angle with leading lines

I switched to the other side of the road, returned the camera to daylight, and tried to guess the difference in illumination value between the faces passing me by and the background. I set –1.3EV of exposure compensation so skin tones would be the right brightness and to control the camera’s desire to render the detail of the background. As the subjects were moving I wanted a shutter speed that would avoid a lot of blur, and I needed a depth of field that would allow me to guess and pre-set the focus, but balanced with a nice soft rendering of the background. I closed the 25mm f/1.4 lens to f/2 which, with the exposure compensation and an ISO setting of 3200, gave me a shutter speed of 1/200sec – enough to freeze most of the movement but without creating a completely static-looking image.
And then I just waited for someone interesting to come by.

In the final image it is the warmth of the light that delivers the atmosphere. The deep yellows scream out ‘artificial lighting’ so we know immediately we are underground or working at night. I love the rich reds of the brickwork that is pleasing and comfortable without taking away the sense of the dereliction of the filthy water-soaked walls.
I was lucky with the greens, browns and blues of the two guys in the scene, and their poses that seem to echo their status relative to each other – the more confident becoming the dominant figure by his looking into the lens in a semi-challenging manner.

If you enjoyed this post why not join me for a street photography course? These happen in London during the day or the evening. Or perhaps a one-to-one session would suit you better. I can help to improve your photography whatever your level of experience. Find out more in the Events and Courses section. 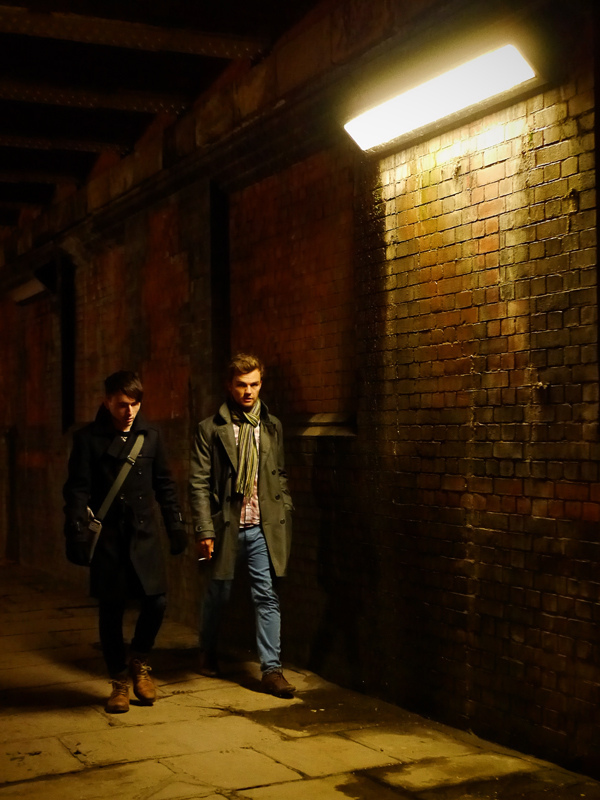 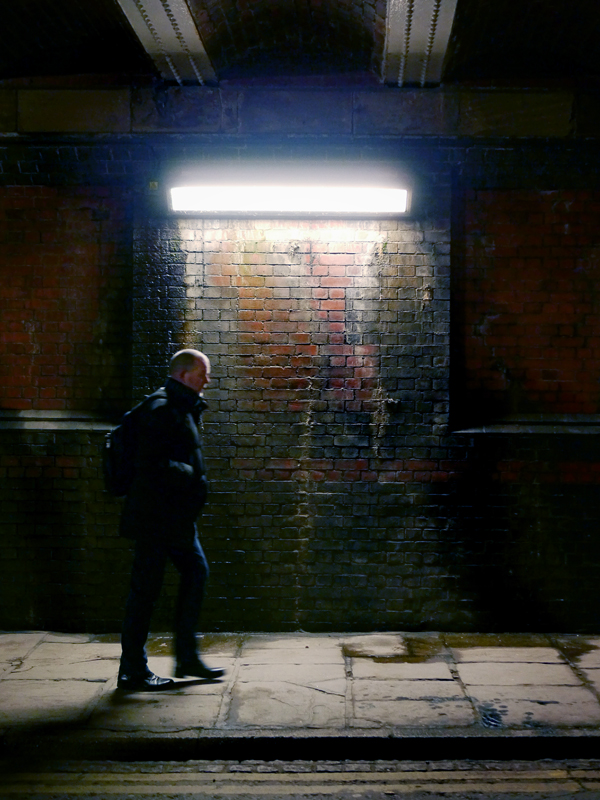