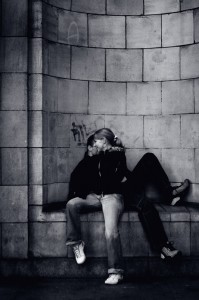 Try something out. Put your camera in its bag, and put the bag over your shoulder. Now, pretending you are Clint Eastwood in a cowboy movie, see how quickly you can ‘draw’ your camera, including switching it on and squeezing a shot off. Providing the settings are about right for the light levels and light types you are practicing in, it probably takes about four to five seconds. If you need to adjust the ISO to achieve a shutter speed at which you can hand-hold the camera and lens, that ‘draw’ time might extend to ten seconds – depending on how user-friendly your camera’s menu system is. It’s a good job you are pretending to be Clint rather than fighting against him, as you’d never get that shot off.

Whether you are a fan of Mr Eastwood’s movies or not you will have noticed that when the man himself is sliding round the side of the General Store in search of the bad guys he keeps his gun in his hand, safety catch off, so it’s ready to fire. And if you are into street photography and catching ‘the moment’ you need to take a leaf out of his book.

Keep reviewing your settings
The day I shot this picture it was heavily overcast and dark. It was also very cold, so I was wearing those fingerless burglar gloves, so that I would be able to hold the camera in my hands all day and still be able to work the controls. As the day got darker and darker I had been adjusting my ISO settings so that I would be able to maintain a shutter speed of at least 1/30sec – the camera had anti-shake built-in. I had a 28mm lens fitted, which gave me a 42mm equivalent focal length on my APS-C sensor, and I’d got it stuck wide open at f/2.8 to let in as much light as I could get.

Rounding the corner of a building I came across these two lovers hiding away from the world to share an few intimate moments together. Before I knew it I had the camera at my eye and was focusing the manual lens. As the shutter fired she just had time to look a little bit sheepish, and he just had time to hide his head behind hers.

Ready to shoot
I took one shot, smiled at them as they laughed at being caught, and then I walked on. It all took about two seconds, and I got the shot because the camera was there in my hand whirring and straining at the leash to take a picture. Had it been curled up snoozing in my camera bag this incident would have just been another one of those occasions when the shot got away. I wouldn’t even have drawn, as I’d have known immediately that as soon as I’d started getting the camera out the dynamics of the picture would have changed and the moment would be passed.

Composition in an instant
With practice I’ve learnt not only to get the subject in the frame in a split second but also to ensure I have a composition. I never know what the next composition is going to be, but I do know that even the sort of picture that is grabbed in a fraction of second needs to respect the viewer and respect the laws of image construction. I managed to keep the camera straight so those blocks wouldn’t create a distraction by sloping off to one side, and I positioned the couple at the bottom of a tall frame to prevent a centre-weighted or top heavy composition. I had to keep her feet in too, and his, and frame the pair of them in their alcove by showing some wall either side so the viewer can understand they were hiding away.

Wide aperture
The wide aperture has combined with the overcast sky to create an almost dreamlike softness that works well in the sooty black and white, blue/green channel conversion. There is romance in the softness that adds a fairy tale quality. 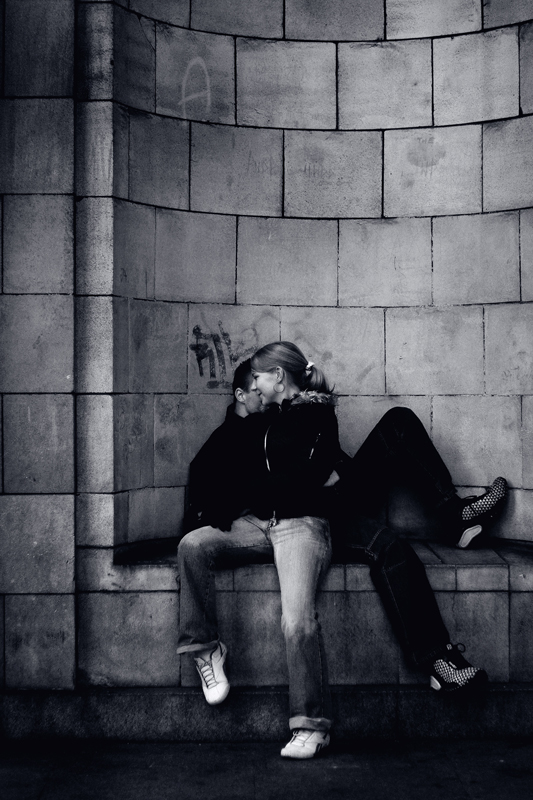